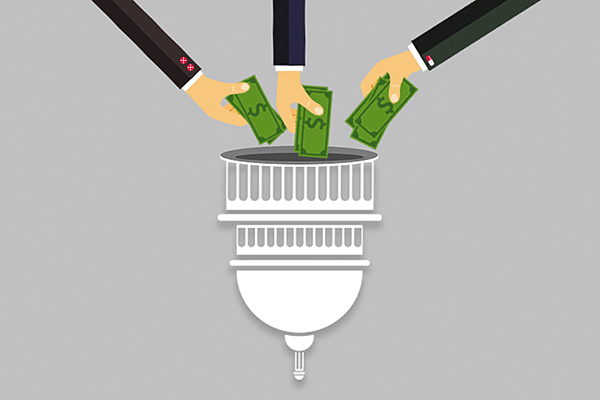 Two federal investigations -- one examining opioid sales, another about a multiple sclerosis drug whose price had soared to $34,000 a vial -- were only part of the troubles Mallinckrodt faced as the year began

The stock of the drugmaker, whose United States headquarters are in St. Louis, was tanking. Wall Street worried that Medicare might reduce the half-billion dollars it was spending yearly on a Mallinckrodt drug with limited evidence of effectiveness.

This year, the company left the industry trade group Pharmaceutical Research and Manufacturers of America, or PhRMA, after the group threatened to kick out companies that did not spend enough on research.

Mallinckrodt, however, has been increasing its spending in another area: It has been writing checks to politicians.

After making meager donations in 2015, the company's political action committee began raising its contributions for congressional campaigns last year. Lawmakers in both the House and Senate collected $44,000 from Mallinckrodt in 2017's first quarter, nearly nine times what they got from the company in the same period two years ago.

Mallinckrodt also spent $610,000 lobbying Congress, triple the amount of 2015's first quarter. The company, which makes pain-control drugs as well as H.P. Acthar, an injectable gel prescribed for multiple sclerosis and other diseases, has lobbied on issues related to opioids, patents, Medicare and other matters, regulatory filings show.

Mallinckrodt is far from unique. This year, a critical and risky one for drug companies, the industry as a whole is ratcheting up campaign donations and its presence on Capitol Hill, a new database compiled by Kaiser Health News shows.

Mallinckrodt acknowledges that it has increased its political spending to help its particular causes. "We actively participate in the political process on issues that matter to us and our patients," Rhonda Sciarra, a Mallinckrodt spokeswoman, said by email. "Our PAC's absolute spend remains small in relation to other companies in our industry."

Congressional donations from pharmaceutical PACs rose 11 percent in this year's first quarter, compared with the first three months of 2015 (the comparable point in the previous election cycle), according to a Kaiser Health News analysis. The increase accompanied a spike in pharma lobbying for the period.

Contributions to powerful committee members who handle health policy matters also increased in the face of public anger over the opioid crisis as well as anticipated renewal of legislation that determines the "user fees" companies pay for regulatory drug approval.

A dozen Republican committee heads and ranking Democrats on health-related panels collected $281,600 from pharma-related PACs in the first quarter, up 80 percent from what people in the same positions collected in the first quarter of 2015, the data show. Such initial donations often set the pace for a two-year election cycle, and suggest whom corporate interests are trying to cultivate in a new Congress, with implied promises of more to come, analysts say.

For pharma companies, "now would be the time to give out the money, ahead of a piece of legislation that may come down the road," said Kent Cooper, a former Federal Election Commission official who has tracked political money for decades. "You want to get your name out there and make a connection with these members' legislative assistants -- so you are known to them and you can get in their door."

Other drugmakers increasing their congressional donations include AbbVie -- whose blockbuster rheumatoid arthritis injection, Humira, faces threats from competition -- and Alexion Pharmaceuticals. A six-figure price tag for Soliris, Alexion's treatment for a rare blood disorder, makes it one of the world's most expensive drugs.

Pfizer, the No. 2 pharma donor in the first quarter after Sanofi, gave $130,900 to congressional campaigns, three times its contribution for the same period two years ago. So far this year, the company has raised the price of dozens of drugs by an average of 20 percent, According to The Financial Times.

PhRMA, a big giver in the past, has not yet joined individual companies in increasing donations for this election cycle. Congressional campaigns collected $7,000 in the first quarter from PhRMA, which Politico reported had raised member dues to prepare for the drug-price fight. They got $31,500 two years ago.

Kaiser Health News analyzed first-quarter campaign finance reports for members of Congress. We included contributions made both directly and through joint fundraising committees to candidate campaign committees by political action committees (PACs) that are associated with pharmaceutical companies, pharmacy benefit managers and trade groups. These reports are subject to change as candidates file amendments and issue refunds. We did not include contributions made by individuals.

Outrage was still bubbling last year over moves by Turing Pharmaceuticals and Mylan to raise prices of cheap-to-make, lifesaving drugs to hundreds of dollars a dose, when the country elected a Republican president who vowed: "I'm going to bring down drug prices." Nearly 8 in 10 Americans said in a September poll they believed prescription drug prices were unreasonable.

Evidence has grown that pharma companies helped fuel the nation's addiction and overdose crisis with sales of powerful painkillers, prompting calls for an overhaul. Drug developers are also preparing for renewal of the Prescription Drug User Fee Act, which generates revenue to pay for government review and approval of drugs.

At the same time, drug companies anticipated Republican efforts to repeal and replace the Affordable Care Act, which finances billions in drug sales. That process has stalled in the Senate. All of this gives drugmakers the most powerful incentives in years to cultivate policymakers, analysts say.

Tense politics may also be prompting members of Congress to be energetic about soliciting donations.

"My sense is that Republicans are nervous in the House -- especially given the long-term record of the presidential party losing seats in the midterm," said David Magleby, a political scientist at Brigham Young University who studies campaign finance. "I would be surprised if Republican incumbents across the board aren't more aggressive in raising money in the first and second quarters."

In the past six months, Mallinckrodt has come under pressure for both painkiller sales and price increases for non-narcotic drugs. Earlier this month, the Justice Department announced the company would pay $35 million to resolve an investigation into whether it ignored enormous volumes of its oxycodone moving through distributors and pharmacies. Over several years, The Washington Post reported, Mallinckrodt was responsible for two-thirds of all the oxycodone sold in Florida.

Mallinckrodt denied it violated the law and said the settlement was not an acknowledgment of liability.

In January, it agreed to pay $100 million to settle Federal Trade Commission allegations that a company it bought three years ago had illegally quashed competition, enabling it to raise the price of Acthar, the multiple sclerosis drug, which the FTC said cost only $40 per vial in 2001, to $34,000. Mallinckrodt disputed the agency's complaint but said it settled to put the matter to rest.

The drug is prescribed to treat a rare form of epilepsy as well as multiple sclerosis and other ailments. Even Mallinckrodt acknowledges that "clinical trials demonstrating the efficacy for Acthar are limited."

Company shareholders have worried that Medicare will crack down on sales of Acthar. Mallinckrodt has pledged to keep future price increases for all drugs to single-digit percentages per year, though that could still be well above the current inflation rate of less than 3 percent.

Mallinckrodt's biggest donations on Capitol Hill, of $5,000 each, went to Ann Wagner, a House member from its home state, Missouri, and Sen. Orrin Hatch, the powerful chairman of the Senate Finance Committee. That amount is the maximum a PAC can give to a campaign committee for each primary and general election.

At Home in Ireland

Ever since it was spun off as an independent company in 2013, Mallinckrodt has made its legal home in Ireland, which allows it to take advantage of lower income tax rates. Hatch favors cutting U.S. corporate taxes to eliminate incentives to make such moves.

Mallinckrodt gave lesser amounts to 16 other congressional campaigns, including that of Paul Ryan, the House speaker. Ryan, who has played down Trump's attacks on the pharmaceutical industry, was the top recipient of industry money in the first quarter, with $82,750 collected, the data show.

The White House has made no proposals on drug costs. Trump has said little about the issue since January, when he said drug sellers were "getting away with murder."

Drug companies are hedging their bets, writing checks to individual Democrats and Republicans. With Trump breaking ranks with Republicans to favor reform, "you can't tell who's your friend and who's not," said Maris, the Wells Fargo analyst. "So you have t o go to a ground game -- a more one-on-one legislator basis."

Kaiser Health News is a national health policy news service that is part of the nonpartisan Henry J. Kaiser Family Foundation. KHN's coverage of prescription drug development, costs and pricing is supported in part by the Laura and John Arnold Foundation. 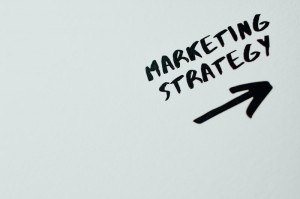 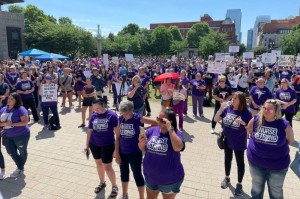