He Feels Their Pain, Then Repairs Their Injuries 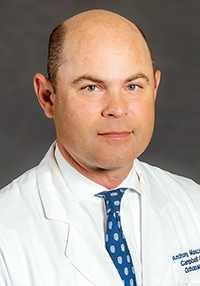 Since his days as a high school running back and basketball player, Anthony Mascioli, MD, has remained a serious sports fan.

He admires the skills and drive of talented athletes, but not just for what they do in competition. He has found that they can be pretty impressive when they're hurt, too.

"Athletes are excellent patients," said Mascioli, an orthopedic surgeon at Campbell Clinic who specializes in sports medicine. "Their determination to get well is at a really high level because they really want to get back to practicing on the field. They want to rehabilitate and do what they have to do, so their motivation is pretty high. They are very determined."

He and four colleagues at the clinic share duties as the team physicians for the University of Memphis, the Memphis Grizzlies and Christian Brothers High School. They share on-call duties attending games, road trips and even practices so injured athletes can get immediate attention.

"The most common injuries we see are cartilage tears, ACL tears, rotator cuff injury, shoulder dislocations, and your run-of-the-mill sprains and strains that do better with conservative treatment," Mascioli said. "The most difficult are knee dislocations where you have to reconstruct multiple ligaments where there's been severe trauma to the knee.

"With the vast majority of injuries we treat, we want them back to 100 percent, and we set that goal for them. Most of them pretty much achieve that."

"The biggest change I've seen is the transition of major surgeries from the hospitals to our outpatient Surgery Center setting," he said, referring to the clinic's two facilities on Wolf River Boulevard in Germantown and on South Pauline in Midtown. "We've been able to transition the vast majority of cases traditionally done in a hospital setting to our surgery centers.

He said the advantage of performing surgery at their own facility can be summed up in one word: control.

"I've talked all over the country about this and I think the biggest advantage is that at our Surgery Center we control everything," Mascioli said. "I would not say that hospitals are bad places. They are great places to go, but at our Surgery Center we control everything from our employees to what equipment we use to the actual setting and I think that results in a really good experience and good outcome for the patient.

"Since we started, we've amassed one of the biggest caseloads in the world from which we are presenting and publishing our results. We've done close to 2,000 outpatient total joint replacements. I typically do 300 or 400 cases a year."

He said that while his focus is more on sports medicine, Campbell Clinic sees patients from all walks of life, from children to elderly adults, with back pain, strains, arthritis and worse.

Mascioli's path to sports medicine began in high school in Rochester, N.Y., although he may not have realized it at the time. He suffered an ACL tear in his senior year football season, but it did not require surgery.

His interest in healthcare as a career stemmed from his father, a podiatrist, and his mother, a nurse.

"As soon as I got to college, I knew what I wanted to do," said Mascioli, who attended State University of New York at Albany. "I applied myself and fortunately it all worked out."

After graduation in 2003 from State University of New York Downstate College of Medicine in Brooklyn, it was on to Memphis.

"My father told me to interview at Campbell Clinic because it's internationally known for teaching and research, the quality of physicians and the way they conduct business," Mascioli said. "I was in orthopedic surgery as a five-year residency and at the end of the residency I decided to focus on sports medicine.

"We have some really good sports guys at Campbell Clinic who were mentors and I saw that they were happy with what they do and were gratified with their professional careers. They're good gentlemen and good physicians and I wanted to emulate them."

He also likes the challenge of repairing sports-related orthopedic injuries.

"I enjoy the type of surgery because most of the time with sports injuries it's done arthroscopically so you're doing minimally invasive surgery with a scope," he said. "It's also technically demanding, and I enjoy doing that type of surgery.

"We've seen a number of knee dislocations where literally the patient tears multiple ligaments in the knee, which requires very complex surgery. Sometimes these players will have bad fractures of the tibia or the shoulder in which case we will ask our trauma partners to help us out. Shoulder dislocations can be very difficult. There's a myriad of injuries that can be difficult to manage. I think at this point I've seen pretty much everything. I did staff trauma at The Med for a couple of years so I got to see a lot of things that most people will never see."

Less challenging was the transition from being a native New Yorker to being a Mid Southerner. He says Memphis is a great place for him and wife Ellie to raise their two sons, Anthony, 10, and Bo, 8. There's also plenty of duck hunting, fishing, golf and friendly people.

"I love the people in Memphis," said Mascioli. "I wouldn't live any other place."