They are not Little Adults 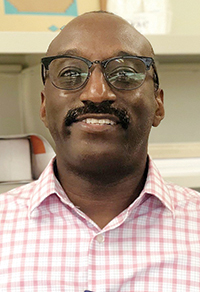 Pediatric Consultants', Dr. Leon Livingston focuses on education for parents as much as treating small children

His exposure to health care began at home. His mother was a registered nurse for more than 30 years in the Duke University hospital system, and his father, an Army veteran, was a radiologic technologist at the Veterans Hospital in Durham.

"When I was growing up, my general pediatrician gave me the opportunity to shadow him during the summers of my junior high school years and I think that's where my interest in pediatrics came from," said Livingston. "I felt that as a general pediatrician you can have an impact on children's overall health through preventive medicine and teaching parents how to better take care of their children."

And, as the well-worn medical phrase goes, treating children is not treating small adults. The issues are different, and they change as children age.

"When you're treating an adult, you're educating the adult on how to take better care of themselves and what to do to get blood pressure or diabetes under control," Livingston said. "With children, you're taking care of the child, but you're also educating the parent on how to better take care of their child.

"Adults deal with issues that sometimes can be related to years-of-life decisions about what you ate from age 12 or 15, or your decision to start smoking at 15 and you're now up to several packs a day at age 60 or 70. As a pediatrician, you're trying to teach people to make better decisions so that when they're an adult they don't have to deal with those issues. A 16-year old's decision-making process might be sort of rash and not well thought out. It isn't the same as a 25-year old's. Those are some of the issues a pediatrician deals with."

In these days of dealing with the COVID-19 pandemic, physicians' offices like Pediatric Consultants have been trying to limit the number of patients in the office at any one time.

"We've been doing telehealth visits and we've also had to do more phone triage to decide if a patient should come in and be seen or if they should be tested first," said Livingston, adding that there also are screening processes for everyone who comes to the office. "Children are still at risk for COVID, but they don't tend to get as sick. There's some thought that smaller children don't spread it as easily, but we've certainly had older kids who had it - high school kids who probably spread it as much as adults.

"How that's going to play out is something we're going to see later on because Shelby County Schools, for the most part, is doing virtual, some schools are doing hybrid, and some schools like those in Mississippi are doing in-person. We'll get a better idea of how that spreads going forward."

The importance of wellness checkups and vaccines poses an extra problem for pediatricians.

"At the start of the pandemic, we were seeing well children only in the morning and then seeing sicker patients in the afternoon to try to keep them separate, but there were still some parents not interested in coming in because they were worried about exposures in getting out," said Livingston. "So, we did have some delay in vaccinations, but we've started to catch up. That was an issue early on, and it still might be an issue when we get to the flu season because people may not come in for their flu shots like they may routinely have done."

On the positive side, he said that since many children are staying home and not mingling with other children at school or day care, there are fewer incidences of routine ear infections and cases of strep throat.

"We're primarily an outpatient clinic so we don't see the severe things they see in the hospitals where kids get admitted for things like respiratory issues," said Livingston. "Our office, more so than others, also sees kids with special needs, such as traumatic brain injury or extreme prematurity, because of (practice founder) Dr. Noel Frizzell's interest in that.

"We're still offering telehealth visits, but at some point, before the end of the year, we'll need an office visit. A tele-visit isn't a replacement for actually seeing a patient and laying hands on them. I can't examine a child's throat or look in a child's ear like I would do in the office. Also, in a perfect world I would have perfect reception and the patient would have great internet access, but that's not always the case."

Livingston graduated from Johns Hopkins University School of Medicine in Baltimore and earned a Master of Public Health before coming to Memphis for his residency training. He notes that the biggest change in his two decades of practice has been in technology.

"When I was starting out, we would write things on paper charts and being able to review what happened with a patient would sort of depend on how well you could read someone's handwriting," Livingston said. "Everyone is pretty much using electronic medical records now and, although it's a pain and all of us complain about too many clicks, I do think it's made taking care of patients a whole lot easier.

"Charts are more legible, and they're recorded in a more orderly fashion. The ability to send a prescription electronically, and not handwritten, has cut down on pharmacists having to call back asking what this medicine is. I think that has helped cut down on medication errors tremendously. Also, being able to review a patient's chart electronically is sort of ingrained in what we do now. It's something we're used to, whereas before, we just had to rely on what the patient told us."

Away from the office, Livingston is an avid sports fan. He's had season tickets for the NBA Grizzlies since they arrived in Memphis in 2001 and closely follows his alma mater, the University of North Carolina Tar Heels.

He also regularly attends the annual pop-culture event known as Comic-Con in San Diego, an event that regularly attracts more than 100,000 people. Because of COVID, however, this year Livingston and other fans had to settle for watching the event from home via digital streaming.