For Dr. Wruble, a Career Well-Practiced 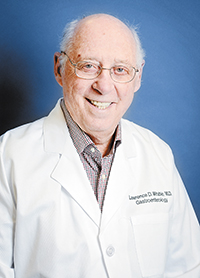 Over the course of a long and distinguished career, Lawrence Wruble, MD, gained notoriety as Elvis Presley's gastroenterologist, broke new ground by admitting the first African-American patient into a public hospital in Memphis, earned awards for his teaching at the University of Tennessee medical school and made headlines for spearheading the 2014 merger of Gastro One and Memphis Gastroenterology Group.

Not bad for someone who had no designs on being a doctor when he was a youngster growing up in Exeter, Pennsylvania.

His parents worked in a grocery store, where his father was a butcher and his mother basically ran the store.

"Because I was a good student and because I'm Jewish, my father decided I had to be a doctor," Dr. Wruble said. "I told him I'm not sure I want to be a doctor. And he said, 'Well, if you don't take the courses for it, I'm not going to pay for your college.'

"Obviously my father knew me better than I know myself, because I don't know that I could ever have enjoyed something as much as I have as a physician."

After graduating from the University of Miami with a degree in chemistry, Dr. Wruble was admitted to medical school at UT Memphis.

"There were no medical schools in the state of Florida," he said. "Miami was just starting, but you had to be a seven-year resident of Florida to get in. So I, like many other guys, were trying to get in anywhere we could. We wound up getting in at these towns we'd never heard of. I'd never heard of Memphis."

In Memphis he met his wife, Diane, and they moved on to Philadelphia for his internship and back to Miami for his residency and fellowship, at which point he was an NIH Fellow. Then Dr. Wruble completed the circle by coming back to Memphis to take a job teaching at UT.

"The truth is, we came back because we were in Miami at the time of the Bay of Pigs," he said. "So we're sitting in Miami and Kennedy and Khrushchev are looking at each other, both with nuclear weapons, and we thought 'we've got to get out of here. We're only 70 miles from these crazy people.'"

He spent his first few years teaching, then decided his future was in patient care. He continued to teach but focused much of his energy on starting a practice.

"I was the first doctor in Memphis to limit himself to a subspecialty like gastroenterology," he said. "There were a lot of people who were cardiologists, but they didn't call themselves cardiologists. There were lean months, but I was a good teacher, so I was able to give talks all over the Mid-South and develop my reputation."

Years later, while he was in practice, he went back to UT and ran the clinical program in gastroenterology.

Decades passed, and Dr. Wruble was president of Memphis Gastro when he noticed the medical world changing.

"We were being wooed by many of the hospitals," he said. "They wanted to buy us, and I was totally opposed to that."

Discussions of merger began with Gastro One.

"We decided to at least try to merge," he said. "We took a year to play around with it, and now there are 34 gastroenterologists in one group.

"I think it's been very successful, and it turns out I was the one who pushed it because there were hospitals willing to pay us a lot of money, but I didn't want to give up autonomy or my employees, even though as the head of the group they were offering me a lot of money."

With 54 years of medical practice to his credit, Dr. Wruble is cutting back somewhat, but he's enjoying himself too much to retire. He has a son, Dr. Gary Wruble, on the staff at Gastro One. Another son, Steven, is a psychiatrist in New York. Daughter Lisa Kaufman is an RN.

"I'm probably the oldest doctor practicing in Memphis," Dr. Wruble said. "I think so. Maybe not. But thank God, it's a matter of being in good health and enjoying what you're doing."

He has received a humanitarian award in Memphis, a Golden Apple Award for teaching, a lifetime achievement award from Baptist Memorial Health Care and an Outstanding Graduate award at UTHSC, among other accolades.

But he was a much younger and less decorated doctor when he took on Presley as a patient in the '70s. He was about Presley's age, and sure of himself enough to give the entertainer an ultimatum.

"What happened was he went out to Vegas, and by that time he was blown up," Dr. Wruble said. "So when we got him back to Baptist Hospital here in Memphis, I spoke to him about it. He admitted he was taking uppers, and he had shows at 11 and 2.

"And that's when I said, 'Get a new doctor because I'm not gonna sit here and watch you kill yourself.' I started to walk out of the room, and he called me back and said, 'Don't leave me.' And sure enough, they let him do one show a night."

After Presley's death in 1977, his primary doctor, George Nichopolous, went on trial for overprescribing drugs, and Dr. Wruble testified for the defense.

"I testified for him because I really felt strongly he was doing everything he could to prevent Elvis from doing this, but whenever Elvis went out of town, the doctors wherever he went would give him anything he wanted. That was the problem.

"I testified for Dr. Nichopolous because I witnessed the fact that he was honest and was doing the best he could. You couldn't control a guy like Elvis, as nice as he was."