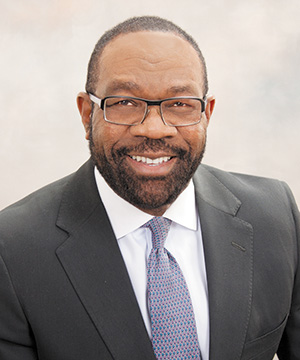 Michael Ugwueke has enjoyed a whirlwind decade at Methodist Le Bonheur Healthcare, steadily assuming more responsibility during the past 10 years while helping craft a strategy that should ensure a bright future for the organization that celebrates its 100th anniversary in 2018.

Starting out as administrator and CEO of Methodist South Hospital in 2007, Ugwueke ascended the leadership ladder with a surgical precision that commanded admiration and respect throughout the organization. Within a couple years of joining the healthcare network he was promoted to senior vice president of Methodist North and South Hospitals in 2009 and five years later became COO of Methodist Le Bonheur Healthcare.

Next stop, the top.

At the beginning of 2017, Ugwueke assumed the primary leadership role at Methodist Le Bonheur Healthcare, becoming President and CEO after the hospital's board selected him to replace longtime hospital head Gary Shorb who retired after nearly 15 years in that role.

For Ugwueke, a native of Nigeria who possessed of a lifetime passion for service, the opportunity to oversee a sprawling healthcare system is both a dream realized and a call to action. In his new role, he's revamped the organizational leadership chart to create greater efficiencies and he is committed to recruiting and retaining top talent from across Memphis, the Mid-South and the world.

"I love what I do and I don't think of it as working because this is who I am, but at the same time I realize that in my role, in this job, I can help us to become even better," Ugwueke said. "My mission is to lead the hospital as we continue to concentrate on providing even higher quality care and services for our patients while increasing the engagement of the talent we have within our system."

Ugwueke has worked in a variety of medical facilities, including leadership positions in Atlanta and Washington, D.C. Before coming to Methodist he was vice president of operations at Saint Joseph Medical Center, the largest Catholic health system in Illinois. During his tenure the center underwent several upgrades that increased patient volumes while decreasing patient wait times.

Ugwueke earned a bachelor's degree in biology from Shaw University, a master's of public health from Emory University, and a doctor of health administration and leadership from the Medical University of South Carolina. Among his numerous professional honors, Ugwueke was selected as one of Modern Healthcare's Top 25 Minority Executives in Healthcare in 2012.

Ugwueke's professional background provides a solid foundation for his position as chief administrator at the city's largest medical employer, with some 500 physicians and more than 13,000 healthcare professionals and support personnel.

In his former role as COO, Ugwueke guided operations in Methodist's five adult inpatient hospitals and affiliates. He was instrumental in standardizing best practices throughout the system and helping create a long-range vision for expansion that resulted in major construction at the medical district campus at Union and Belvedere.

"We're increasing the number of operating rooms and the number of intensive care rooms and making the entire tower more patient-friendly," Ugwueke said. "Over the last 100 years we've become more spread out over some of the campus, so we're centralizing some services to make it a more convenient experience for patients and we're adding amenities. With the average stay now lasting between four and six days, we are making sure that the environment contributes to healing."

The decision to invest in the downtown medical district was a deliberate affirmation of the hospital's commitment to the location, as well as to diversity: an estimated 26 percent of the companies involved with the construction project are minority and women-owned businesses.

"We are the largest medical employer and the largest medical facility in Memphis and this project has created a lot of jobs during the construction process and we've actively sought to include a significant percentage of minority and women-owned companies in the process," Ugwueke said. "We're doubling down and reaffirming our commitment to this area and demonstrating that we're an active partner in the medical district."

When the new tower is completed, demolition will begin in 2019 on the Crews building. The cleared area will be replaced with green space, complete with gardens and quiet areas for patients and families. The design will provide a verdant oasis in the midst of the bustling medical district and create a serene environment.

Ugwueke said, the work continues a tradition of exemplary care and services that has led to Methodist's being named best hospital in Memphis by U.S. News and World Report and Le Bonheur Children's Hospital being among only 7 percent of hospitals in the nation to receive Magnet status by the American Nurses Credentialing Center.

"We are a physician-led, comprehensive healthcare system with one of the top 20 children's hospitals in the nation and we are also a teaching facility for the University of Tennessee Health Science Center," Ugwueke Said. "But we aren't satisfied with simply staying where we are. Our goal is to be nationally recognized for excellence in clinical services, patient safety and quality and compassionate care."