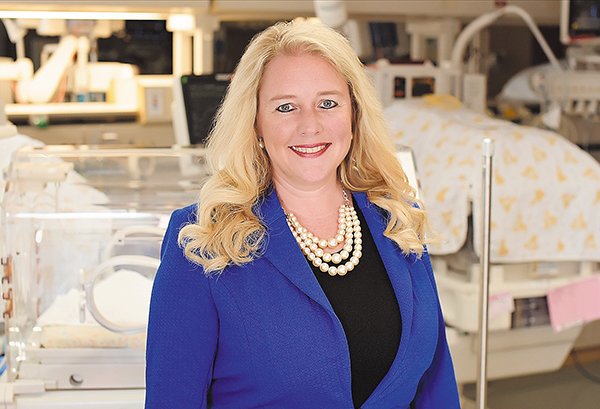 While her day job as Executive Vice President at West Tennessee Healthcare has its own set of demands, Lisa Piercey has added more responsibility and another title to her resume: 2017 President of the MidSouth Healthcare Executives.

With nearly 250 members from across West Tennessee, including the Memphis area, the regional chapter of the American College of Healthcare Executives (ACHE) is helping healthcare executives network, enroll in continuing education and further develop their leadership skills.

"We enjoy support and close collaboration with our parent society," Piercey said. ACHE has over 40,000 members and is led by a distinguished Board of Governors."

The MidSouth Chapter generally meets eight times a year. While the bulk of its membership resides in the Memphis metropolitan area, the chapter's membership is open to professionals from hospitals and health systems, consulting firms, healthcare associations, managed care companies, pharmaceutical companies and other organizations that provide and support the delivery of health services across West Tennessee.

"For me, the initial benefit of becoming a member was to begin my path to board certification in healthcare management," said Piercey. "It is an arduous process that takes several years, but being certified as a Fellow of the American College of Healthcare Executives (FACHE) is a distinguished honor, allowing me to join an elite group across the nation, in the widely recognized highest level of certification available for healthcare executives."
While the Chapter follows the lead of the ACHE and focuses on diversity and ethics in healthcare, Piercey says her personal goal for the Chapter is more membership directed.

"I want to see our membership grow, especially outside the Memphis area. We have a wide variety of healthcare facilities throughout rural West Tennessee, and our local leaders can make significant contributions to the organization, especially as it pertains to management of small and/or independent hospitals, medical group practices, nursing homes, etc.," she said. "Networking - really building relationships, not just exchanging business cards - with other local healthcare professionals is crucial to sharing best practices and discovering the nuances of various settings, such as for-profit, not-for-profit, academic, and philanthropic."

With its close tie to the University of Memphis' Master of Healthcare Administration (MHA) program, MHCE affords graduate students and faculty the opportunity to interact with, and learn from seasoned healthcare executives. In fact, MHCE was recently recognized the chapter by as having the nation's highest year-over-year chapter membership growth (over 15 percent). That is something Piercey attributes to the engagement of students who transition into membership after graduation.

Piercey jumped into leadership in MHCE after just a few years of membership.

"I joined the board in the progressive ranks of education chair, treasurer, vice president. In December of 2016, I was installed as Chapter President for the 2017 year" she said. "Due to my chapter work, I was appointed in 2015 to the Management Series Editorial Board for the Health Administration Press, and I currently serve as the Chairman of that group. We frequently review and offer input on manuscripts of proposed healthcare publications, which allows me to stay current on industry theories and commentary, on the national level."
Much as it is across the nation, Piercey says the issue most pressing for members as well as all healthcare executives, is healthcare reform. "Today's healthcare leaders must remain educated and flexible on alternate payment models," she said. "As well as the change management techniques required to implement these paradigm shifts."

While MHCE as a group does not necessarily have a specific political platform, it does uniformly and consistently advocate for affordable access to healthcare for all, as well as sustainability of healthcare organizations.

"We educate policymakers and business leaders on the complexity of healthcare and remind them that the provision of medical services in our current system is not always amenable to free market capitalism," said Piercey. "It is not as simple as flipping a switch and changing laws to meet either party's agenda. When the intricacies of practicing and administering healthcare are ignored, people die."