Pulmonologist or a Critical Care Doctor? 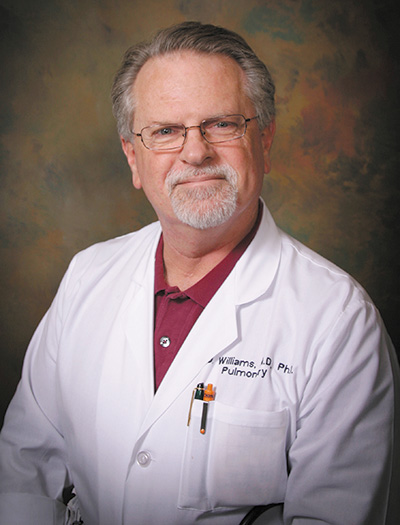 For Glenn Williams, It's Not the Label It's the Results That Are Important

As essential as breathing is to human life, one might think everyone would know what a pulmonologist does.

But that's not the case. Doctors who treat Chronic Obstructive Pulmonary Disease are in some cases afflicted with Chronic Pulmonologist Identity Syndrome.

Glenn Williams, MD, has been with Mid-South Pulmonary Specialists since 1991.

"I don't think people really understand what a pulmonologist does," he said. "I have a biking group that I go with, and the guys are all very successful people in their own areas. But when I say I'm in pulmonary critical care, I've heard them tell people 'he's an anesthesiologist' or that I'm a heart doctor.

"Those are the two things pulmonologists are mixed up with - anesthesia and cardiologists. So a lot of times I just say I'm a critical care specialist because folks can identify with that a little bit easier."

Unless a campaign is launched to raise the profile of pulmonologists, that's the way it's going to be for these physicians who treat respiratory diseases. In the case of Dr. Williams, two of his areas of focus are pulmonary hypertension and interventional bronchoscopy. Over the past five years or so, he also has been providing critical care in the heart transplant program at Baptist, along with his Mid-South Pulmonary partners Dr. Roy Fox and Dr. David Munday.

New drugs, Dr. Williams said, have drastically changed the approach to pulmonary hypertension. Treatment early on started with an intravenous drug, and through the years that was followed by a series of oral drugs. Hypertension results, he said, when the arteries that go into the lung develop elevated blood pressures, affecting right heart function.

Symptoms include shortness of breath, swelling and fluid retention.

"Physician awareness has gone way up," Dr. Williams said. "I think we're recognizing the disease process much more than we used to, and we're able to intervene much earlier than we used to."

Dr. Williams and his group also treat ARDS (adult respiratory distress syndrome), which could be fatal.

"But over the last 10 to 15 years, there's been more usage of ECMO," he said. "This is a technique that we started using, and Baptist is currently the only facility in this area of the country that does this."

Treatment includes cannulating patients and putting them on a lung bypass machine, which oxygenates and ventilates the patient while the lungs are healing.

"We've probably done around 85 cases in the last four years, myself along with Dr. John Craig. Slowly the communities and outlying areas have become more and more aware that we have this capability. So our referrals are creeping up a little bit each year. It's a big deal, very expensive and very complicated."

In the area of interventional bronchoscopy, Dr. Williams said, "we do tumor destruction with catheters in the airway, and we can also do stent placement. We have some advanced modes of diagnosis of peripheral lesions with the use of a computer.

"So these are all nice techniques that interventional bronchoscopists like doing."

Working with the heart transplant team at Baptist is probably what occupies most of Dr. Williams' time these days. In that process, he said, "we're the critical care guys, so the surgeons do the transplants and place a device called the left ventricular assist device, and our primary function is stabilizing the patient before and after that surgery.

"We work very closely with advanced heart failure cardiologists. It's very much a team approach."

Born in Kansas City and raised in Atlanta, Dr. Williams came to the University of Memphis in 1971 and has never left the city. He earned a degree in chemistry, majored in biochemistry in graduate school and earned a PhD in chemistry.

During grad school, he got a part-time job as a med tech at the Newborn Center.

"I started to learn a lot of physiology and respiratory medicine with the neonates on the ventilator and their associated physiology," he said. "I really started to enjoy what I was doing and decided to apply to med school, coupled with the fact that my buddies who finished their graduate degrees in chemistry and biochemistry were telling me there weren't any jobs out there."

He met Teresa, a neonatal nurse at Newborn Center, and they were married just before Dr. Williams started medical school at UT Memphis.

As a third-year resident, he was encouraged by one of the pulmonary critical care staff people to pursue that specialty.

"I really liked that area of study anyway, so it didn't take a whole lot of encouragement," he said.

When he finished a fellowship, he, along with Dr. Fox, were offered a job with a fledgling Mid-South Pulmonary. The group has since grown to 19 physicians and one nurse practitioner.

The group was primarily focused on the Methodist hospitals at that time, but Dr. Williams was sent east, "and I became the Baptist doctor in the group."

He and Teresa had three children, and raising them became problematic with both parents working jobs in healthcare.

"Early on in practice an average week for me was 70 to 90 hours, really bad," Dr. Williams said. "It's much better now because I've gotten more help and I limit what I do compared to what I did when I was younger."

Finally he urged Teresa to leave her nursing job and stay home with the kids.

"So she raised our family, along with me, but she was on the front lines doing most of the work with it. And I think it turned out OK."

All three children have medical degrees. Jason, the eldest, is in private practice with Memphis Obstetrics and Gynecological Association. David is in his third year of a pulmonary critical care fellowship and has plans to join his father at Mid-South Pulmonary. Heather is a third-year OB-GYN resident and may join her brother at MOGA. 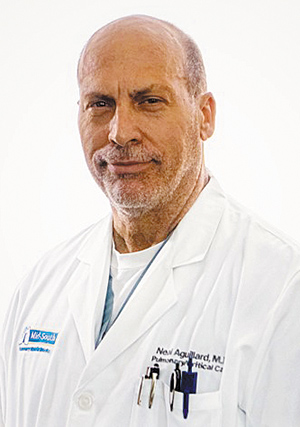